Dealing with a Global Threat – the TOP7 Announcement that almost didn’t make it.

At the beginning of the New Year in 2020 we were looking at the threat of war rising out of the rhetoric coming out of Washington and from Tehran. I had a flight planned to travel to Kuwait in January to give a keynote address as part of the Kuwait Public Policy Center’s Lecture Series at the General Secretariat of the Supreme Council for Planning & Development in Kuwait. See: https://lnkd.in/esEVzzn. As the tensions grew and missiles were fired that downed Ukraine International Airlines Flight 752 on Jan. 8, I debated my flight to Kuwait, which neighbors Iran on the Persian Gulf. Ultimately, I made the trip via Cairo and spent an uneventful, but very enlightening, week in Kuwait. Upon my return we immediately had another crisis to deal with – whether or not the ICF Institute-organized ICF TOP7 event in Taoyuan, Taiwan would continue or not due to the outbreak of the novel coronavirus in Wuhan, China.

Over half of our international speakers and many of our delegations pulled out of the ICF TOP7 event in Taiwan as a result of increasing concerns over the novel coronavirus that was spreading in China, despite the containment efforts in Wuhan. But as we watched the announcements by the W.H.O. and communications from Taiwan, we realized that Taiwan’s situation was not the same as China’s and we made the decision to continue with our event. The risk was relatively low in early February since there were as many relative cases in Canada and the USA as there were in Taiwan at that time. Many delegates agreed and continued to plan for the visit. Nevertheless, there were a lot of cities and councils that banned travel for their employees and mayors. However, we still had mayors attend from Australia and Spain along with senior executives from around the world, many representing SMART21 communities, attending the TOP7 Announcement in Taoyuan on February 10. The overall event eventually attracted over 300 attendees, many from across Taiwan. As a result of continuing our conference, the President of Taiwan, Tsai Ing-wen, attended and personally thanked me and the organizers for continuing to hold the event in Taoyuan. "This was important for Taiwan", she remarked, with a nod of appreciation for our collective efforts to come together in the face of the global media and the announcement of the W.H.O., which placed Taiwan within the perceived travel advisories related to China, negatively impacting its economy as well as reinforcing its global perception as part of China.

However, by all accounts, the ICF TOP7 Conference and Announcement was a huge success despite the COVID-19 backdrop. We included a few video-conferenced panelists from Brazil and Vietnam and on-site panelists from the USA, Canada, Spain, Japan, Vietnam, and Australia. We also took precautions in large crowds, during company visits and in subways. The event in Taoyuan concluded with the selection of the TOP7 cities for 2020 at a banquet on February 10 through presentations by ICF’s Matt Owen and John G. Jung. That evening, we even took in Taoyuan’s Lantern Festival and its amazing fiery dragon display in one of Taoyuan’s parks.

On the next day, we had a full bus of delegates to visit Taoyuan’s amazing innovation community including Taiwanese companies such as O’Right, a young, holistically ethical and ecologically-responsible research, development and merchandizing company for hair products; Gogoro, an electric-battery scooter company that is competing well with the omni-present fossil-fuel motorcycles that buzz along every road surface in Taiwan; and the YES Health iFarm, a 14-level vertical farm in the city of Taoyuan that was as much an inspiration about urban farming as it was inspiring to hear the owner’s story of how he started it to fight his own personal health issues and diabetes in his community. The ICF Institute and the City of Taoyuan organized a highly professional and interesting couple of days that gave the delegations that visited a full understanding of their city’s excellence as the 2019 Intelligent Community of the Year. 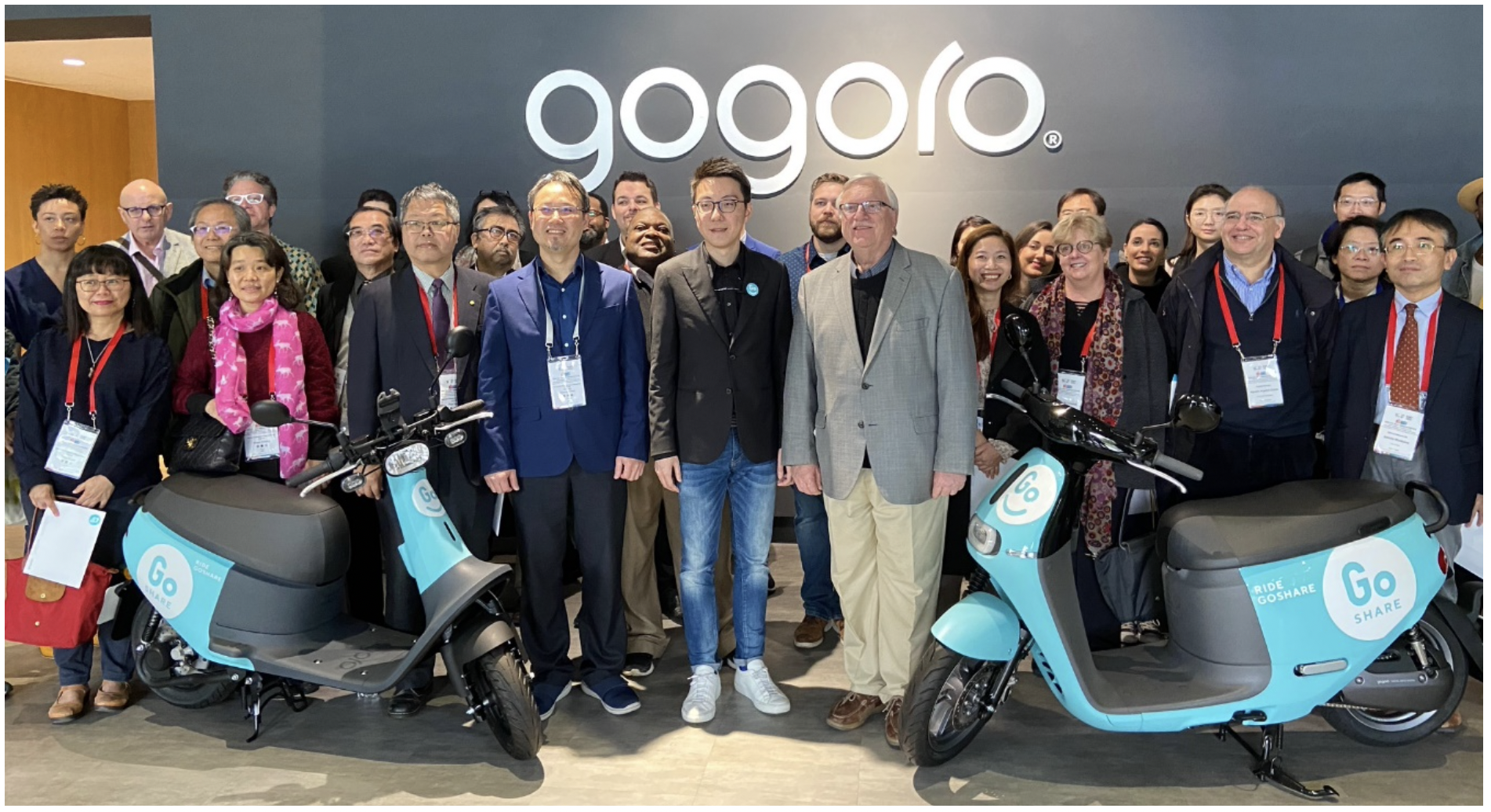 From February 12-14, our colleagues at ICF Canada and ICF Taiwan collaborated to coordinate an extended program that gave international delegates the opportunity to visit demonstration projects in Hsinchu, New Taipei City and Taipei. They also undertook a matchmaking event that provided a small, but determined group of Canadian and American delegates, direct contact with some of ICF Taiwan’s many smart-city business cases ranging from digital aquaculture and autonomous vehicles to unique EV charging stations and Taiwanese risk management systems. The delegates toured the Industrial Technology Research Institute (ITRI) in Hsinchu City, which is a technology research and development institution, founded in 1973, to play a key role in transforming Taiwan's industries from labor-intensive into innovation-driven opportunities. Its fields of focus include smart living applications, health-related devices, and applications aiming at creating sustainable ecosystems. ITRI’s success stories include over 270 innovative companies, including globally significant semiconductor firms such as United Microelectronics Corporation (UMC) and Taiwan Semiconductor Manufacturing Company (TSMC). The international delegates were able to see these huge firms at the near-by Hsinchu Science Park. Hsinchu City is also the home of Chung Hua University where the ICF Institute in Taiwan is located. Both Hsinchu County and Hsinchu City were previously celebrated by ICF as TOP7 cities.

Delegates also visited government departments from New Taipei City and innovative start-ups at Telecom Park (T-Park), as described by its developer, the Far Eastern Group, as a major “pilot intelligent community”. T-Park aims to eventually create a high-quality of life for 50,000 new employees working in 250 companies in the middle of New Taipei City. Much of the development has been built, attracting many of the Taiwanese firms which are leading global firms from semiconductors to notebook PCs. The greater Taipei area in northern Taiwan, including New Taipei City and Taipei have emerged as a key R&D hub for the global telecom industry, adjacent to Taoyuan, with its Asian Silicon Valley and future Aerotropolis opportunities. Our delegates also visited SMART Taipei, along with several of its partners and many early stage “smart companies” during a match-making event that promises to have much follow-up between these start-ups and the delegates.

Overall, our events in Taiwan in February 2020 were successful despite the number of international delegates having cancelled their plans to attend due to the novel coronavirus travel bans. Clearly the extremely low risk and timing was such that we could make the decision to continue to pursue the program in Taiwan. But there were signs of the threat getting worse. Delegates going through Hong Kong and Shanghai had to make plans to return to their home countries via a different route. Since returning home and communicating with delegates afterwards, we agreed that we seem to have just squeaked by. We acknowledged that we would not likely be making this announcement and holding the conference in Taiwan today. In fact, the ICF Co-Founders will not be traveling to the TOP7 cities this Spring to undertake their annual TOP7 city evaluations. Instead, ICF will be practicing what it preaches – to use the enabling technology for the benefit of its community. Over the next couple of months, ICF’s Co-Founders will visit North American, European and Australian TOP7 Intelligent Communities through web-based video-conferencing technologies to learn as much as possible about the communities to write their site evaluation reports. These reports are part of the information that is made available to ICF Jury members for the final selection of the Intelligent Community of the Year, which will be awarded in Dublin, Ohio this year at its concluding event at the ICF Annual Summit.

With events, conferences and major gatherings being cancelled or rescheduled as a result of the spreading COVID-19 threat around the world, we are all recognizing that new and innovative measures will be needed this year. From broadcasts of soccer matches in Italy with empty stadiums to cancellation of massive exhibitions such as Mobile World in Barcelona, to the closing of several Disney Theme parks, we will be living a very different world in 2020. When we saw the ball drop in Times Square on New Year’s Eve, we had no idea what 2020 would bring, but the spread of the novel coronavirus - from the wet-market in Wuhan, China to Italy to Seattle, and potentially to a community near you - is frightening due to its uncertainty. We lack real knowledge of what we are dealing with and lack a potential vaccination for another year or more. Yes, the normal annual bout of influenza is claiming hundreds of thousands of lives, which dwarfs COVID-19’s statistics. But it’s the uncertainty and lack of vaccines that keep the media’s attention at its peak and consequently it continues to feed our collective fear. To lessen the fear and uncertainty, companies and governments are telling their employees to work from home; to essentially use the technology to telecommute; banning flights to attend conferences; and cancelling events globally. With a decrease in air-traffic; cities closed due to attempts to contain the coronavirus; and shifting trends to telecommuting, we may see a silver lining in the form of less pollution, changing work-habits and a deluge of new applications to aid in the health, sustainability and vitality of our communities in the face of the COVID-19 threat. We will continue to monitor the spread and voracity of the disease as it impacts our global intelligent communities. Keep safe – wash your hands and don’t touch your face!