One of the urban myths is that technology, especially gaming technology will create couch potatoes, making you dull, inactive and unhealthy. And for many years that was probably the case. But in July 2016 a mobile game called Pokémon Go was launched globally to immediate success. It was even called a "social media phenomenon". In Pokémon Go millions of players use GPS capability in their smartphones with an augmented reality platform to locate, capture, battle, and train virtual Pokémon creatures located in the same real-world location as the player. This global phenomenon has been downloaded more than 500 million times worldwide. Even though by end of that same summer Pokémon Go’s popularity was beginning to seriously fade, the impact was evident. It got millions of video machine advocates off the couch, go outside and walk to catch their Pokémon Go characters.

An obvious side effect was that by walking, players burned 138 calories per hour, with 43% of players indicating some loss of weight (an average loss of weight of 3.2 pounds per player since starting to play). Urban planners have been trying to inspire people to realize the environmental, health and economic benefits of a walkable city. Seemingly, Pokémon Go has achieved overnight what city officials have been promoting for years. 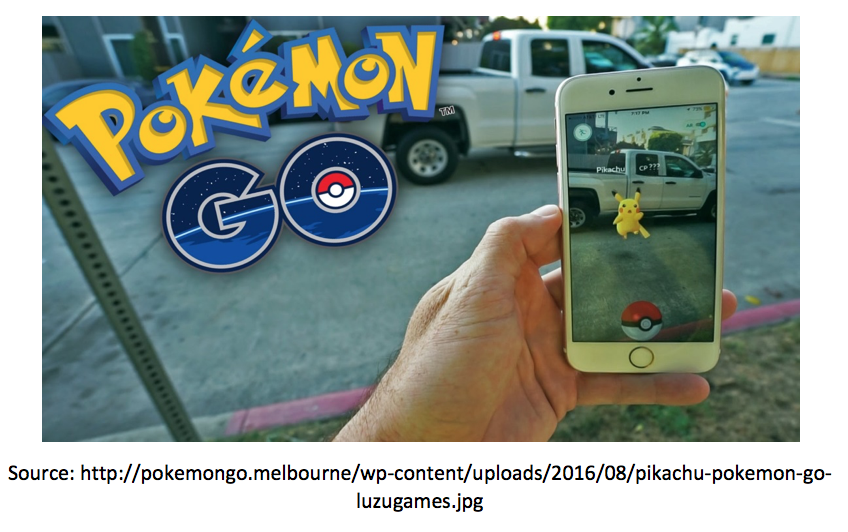 In addition to promoting physical activity, Pokémon Go is credited with popularizing location-based and augmented reality gaming which has helped local businesses to grow, not only through sales of the popular game but by attracting Pokémon Go players to PokéStops located in or near restaurants, retail outlets, malls and other commercial areas. However, it has also attracted controversy for contributing to accidents and becoming a public nuisance at some locations. Various governments expressed concerns over the security of the game, with some countries passing legislation regarding it. However, in Norway, legislators had been distracted by the game: its President was caught playing it in Parliament. Nevertheless, the game, whether it survives its popularity into the New Year or not, has made historic gains for the gaming industry. It has also heightened the awareness of the value of gamification and in many of its positive attributes.

Games, like Pokémon Go have reported potholes to its civic officials and reported crimes in progress to the police, even landing criminals in jail. PokéStops have included cultural locations such as museums and places of worship that may have been the first-time players have been exposed to them. Parks and national landmarks have seen an influx of visitors looking for characters. The game was even released in Brazil in time for the Rio 2016 Olympics to the delight of civic officials and players alike. It has also been lauded for having a positive impact among people with autism, helping people with dyslexia improve their comprehension and improved cognitive functioning for elderly people. So move over kids, your grandparents will want a few hours on your latest game once they discover the medical benefits. 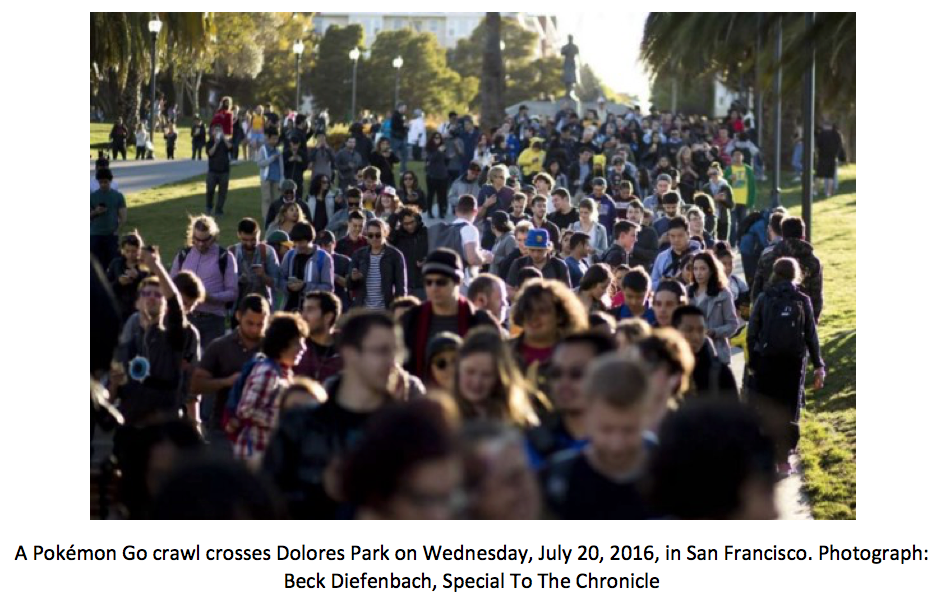 But can games become a new platform to harness regular civic engagement between city officials and the public to help create the best community possible for them?  Games, like Pokémon Go have proven that they can be innovative and powerful tools to help in engaging civic discussion. Because of greater pedestrian activity, people have become more aware of their environment and what their city offers or of its flaws that need to be corrected. They have learned the positive and negative aspects of their community’s streetscape, transit infrastructure and related urban environment and reported them to civic officials, triggering dialogue and heightening civic engagement in urban affairs. Some communities have reported that city officials have begun to use the platform to raise awareness to address local issues, promote events and encourage tourism.

Pokémon Go advocates indicate their heightened awareness of the urban ecosystem can benefit urban planning by listening to the player’s experiences and perhaps by having planners and civic decision makers themselves play the game as they design their cities. They claim that incentivized mobile games could create better integrated cities, encouraging pedestrians and local officials to work together to create a more liveable and well planned urban community by aligning city programs and services with interactive incentives to encourage player mobility.

Games are becoming highly sophisticated with apps, for instance, encouraging gamification to help to cure diseases by identifying damaged or cancerous cells; high resolution augmented and virtual reality games and applications can assist in training the military, surgeons and pilots; and applications are assisting in the urban planning process, among other community and societal benefits. Augmented reality is providing commercial success in broadcasts, for example in sporting venues; and ultra-high resolution virtual reality is finding much success among gamers.

Despite the clunky headgear, it is building tremendous business opportunities for companies like Facebook’s Oculus for gaming, 3D entertainment, and virtual exploration. However, while gamers can experience the impression of entering the 3D world that they are viewing with this VR helmet, they cannot imagine or see their body in it. That is about to change. An Australian company called Euclideon has developed near holographic resolution and developed rooms where this experience may be possible for players to explore it on the Gold Coast of Australia near Brisbane. Euclideon created a laser-scanned virtual reality image that is exponentially more realistic than any virtual reality image to-date. Through the rooms in the Holoverse Centre, a first of its kind, 40 room pilot project, the public are now able to experience it. The images create a 3D graphics experience they call ‘unlimited detail’, replacing traditional polygon based rendering and deploy a “point cloud search engine indexing system” unveiling a holographic image with unlimited 3D detail on a screen simultaneously. With Holoverse the digital world enters into your reality - your body is moving at a perfect 1:1 ratio between the 3D image in the virtual world and your body in the real world. 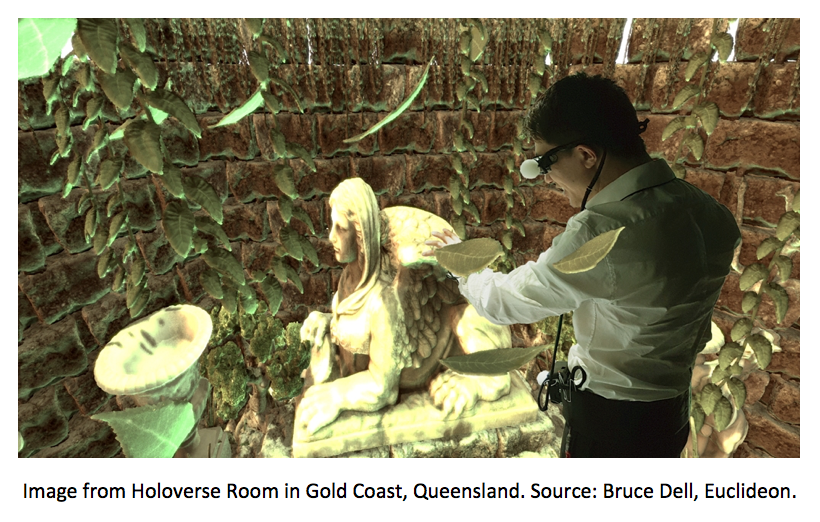 Like other VR caves before it, the human participant will still need to wear glasses to benefit from the effect, but they do not need to strap on a bulky looking headset that takes their peripheral viewing capability out of their control. Like IMAX’s 3D experience, this life-like projection experience can be extremely stimulating entertainment but as you can imagine it can also provide tactical and business opportunities. For instance, virtual tourism, training for medical and mobility purposes, education and commercial demonstrations such as test driving cars or trying on virtual dresses in a virtual fashion show easily come to mind. Untold other opportunities will become more evident as these games, simulations and platforms become more readily available, affordable and part of our daily lives in our smart communities.

Imagine, curing cancer through a process of gamification or discovering an entirely new method of solving problems through a game-related application. These are possible. So, mothers: don’t be so hard on your kids on the couch playing their favorite video games. Tell them to go outside to play their video games to help to improve the planning of our smart communities or give them an app designed to help surgeons sort out cell samples that could lead to curing cancer. Our future may depend on them.