The IoTCC and InsightaaS have released a major new report that explores challenge and opportunity in the use of the Internet of Things (IoT) in smart communities. IoValue: intelligence in Community Ecosystems is the first report in a series of best practice papers co-developed by members of the IoTCC, led by Mary Allen of InsightaaS.

The concept of “smart” city or community is not new; in fact, city operators have been using network connectivity and computing for a long time, deploying technology to support digital processes for applications ranging from back office records to property tax billing to the control of water and electricity distribution. But 'intelligent community' is another proposition, and one of the first questions addressed by the report working group is how to describe it and who to include – is intelligent community restricted to municipal government, or are there other groups involved, and what are its physical limits? The IoTCC group used the following diagram to illustrate the collaborative nature of the community. 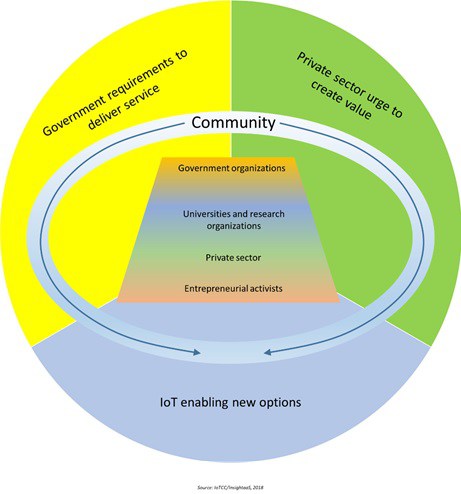 What is new, however, is the Internet of Things – solutions based on the combination of network connectivity, analytics and supporting ICT, and sensors/actuators deployed on physical objects. For example, IoT could include traffic monitors, vehicle sensors, street light sensors, building controls and many other devices in other verticals – which generate the need for collection, storage and processing of massive amounts of data that can be used by multiple parties for various purposes.

Read the full story at insightaas.com.