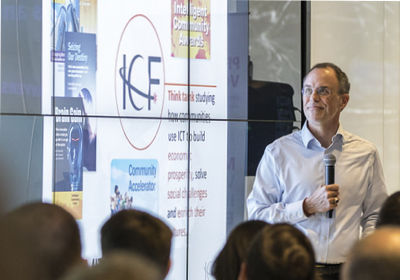 Serving as the content lead for ICF's annual Summit in New York City, Robert is the author of ICF's founding study, Benchmarking the Intelligent Community. He has contributed articles to The Municipal Journal of Telecommunications Policy, IEDC Journal, Telecommunications, Asia-Pacific Satellite and Asian Communications; and has appeared in segments of ABC World News and The Discovery Channel. A frequent keynote speaker and moderator at municipal and telecom industry events, he has also led economic development missions and study tours to cities in Asia and the US.

Robert developed and leads the Community Accelerator program, which provides cities and regions with a set of development tools to improve competitiveness, deepen social inclusion and enhance their to adapt in today's fast-moving Broadband Economy. He leads the Intelligent Community Master Class as part of this program, as well as ICF's advisory services for communities.

- "Robert Bell and the Intelligent Community Forum have become a key partner in our Digital Initiative in Walla Walla. Robert presented his “Community Accelerator” Master Class. It was a powerful program for our community. His presentation gave a diverse audience a view of our potential future and helped get everyone on the same page. Robert is a gifted speaker and blends a great combination of relevant information, humor and gravitas. We already have him booked to rejoin the Walla Walla community in our ongoing discussion and quest as an Intelligent Community. Robert rocks!" - David Woolson, President & CEO, Walla Walla Valley Chamber of Commerce 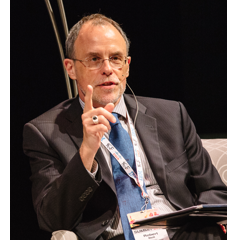 - "Robert Bell was a keynote speaker for the kickoff of a new speakers series for our community. In our efforts to position Waterfront Toronto as a thought leader in this area of our revitalization efforts, having you attend and speak as one of the founders of the Intelligent Community Forum lends a great deal of gravitas to our efforts." - John Campbell, President & CEO, Waterfront Toronto

- "Parkland County has had the great pleasure of working with Robert Bell on our SMART PARKLAND Intelligent Community Project and he has assisted us through the ICF Accelerator Program by mentoring and serving as a keynote presenter at numerous events. As a presenter, Robert is unsurpassed. He has the knowledge, perspective, intuition and communication skills to effectively motivate audiences ranging from ICT industry reps, to municipal councillors, distance learning education providers, Internet Service Providers, small business people, seniors and youth. Robert has a positive 'can do' attitude that translates into successful presentations and relationship building." - Al McCully, Smart Parkland Project Consultant, Parkland County

From Connectivity to Community
Webinar for communities participating in the Illinois Broadband Grant Program, December 17, 2020

What's the Cost to a Community of Not Having Broadband?
Bloomberg Advantage with Carol Massar, September 20, 2020

Why Small-to-Midsize Cities are the Next Investment Opportunity
Bloomberg Advantage with Carol Massar, February 21, 2019 .

Invest a Dime, Get Back a Loonie
Keynote at Columbia Basin Trust Symposium 2017, Kimberly, BC, Canada, October 14, 2017 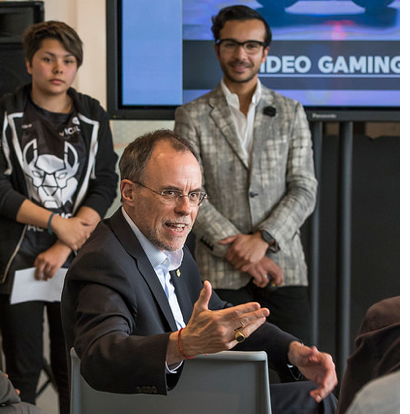 "Broadband and the Future of Butte Silver Bow"

Share on
See other pages related to Speaker Robert Bell