The Trump in the Coal Mine

The multi-billion-dollar circus that is the American Presidential election rolls ever on. We stand amazed that a billionaire real estate developer and reality TV star, spewing a sneering mix of lies and vitriol, dominates the Republican side of the contest. He is less a Presidential candidate than a walking Twitter account, with a gift for finding words and attitudes that speak powerfully to a segment of the American people.

Who is this segment? Who does The Donald speak for? Nate Cohen, writing in The New York Times, shared an analysis conducted by Civis Analytics in an article well worth reading. They are more likely to be white, male and 50 years old or older than the rest of the US population. They are more likely to have a tendency toward racism, which is why Trump’s most revolting views do not send them running. They are also short on higher education; his strongest support is in Census tracts where 20% or less of the population has, at minimum, a bachelor’s degree. 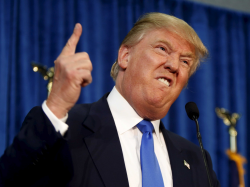 What does that add up to? To me, it is a description of people on the losing end of the broadband economy. The growth of the knowledge-based, innovation-focused economy, which so ruthlessly purges uncompetitive industries and companies, has stunted their job prospects and shrunk their hopes. They feel betrayed and angry. So an angry man – despite his riches, reputation and liberal leanings – is the only one who speaks what is in their hearts.

My friends and colleagues around the world may shake their heads at this American phenomenon. But that would be to miss the point. The same anger at being left behind is rising in Europe, fueled by endless recession and now massive migration. It is among the many forces tearing the Middle East apart and roiling Latin America as the commodities boom ends. There is literally no chance that Donald Trump will enter the White House, except perhaps on a visitor’s pass, because he has too few supporters and they are not likely voters. But like the canary in the coal mine, Trump is a sign of trouble that must be addressed. For all of its benefits, the broadband economy is bad news for part of our people and we ignore their needs at our peril.

About Robert Bell
Robert Bell is co-founder of the Intelligent Community Forum, where he heads its research, analysis and content development activities.
See other pages related to Blog Broadband Robert Bell Digital Equality
Share on