Mayor Fred Eisenberger was born in Amsterdam and came to Canada with his family when he was eight years old, settling in Hamilton.

Fred is currently serving his second four-year term as mayor. Previously he served as a member of Hamilton council, as chair of the Hamilton Port Authority, and as president and chief executive of the Canadian Urban Institute, where he was involved in the development of leading-edge, progressive urban policy. 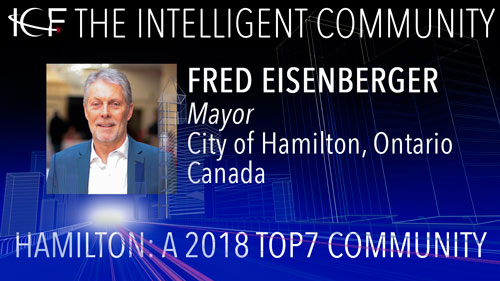 During Fred’s tenure as mayor, Hamilton was named by the Conference Board of Canada for having Canada’s most-diversified economy. In 2016 the Intelligent Community Forum (ICF) named Hamilton as one of the World’s 21Smart communities, and in 2018 ICF named Hamilton one of the world’s Top7 Intelligent Communities. Hamilton’s transformation has been notable.  A national advanced manufacturing hub, with burgeoning life sciences and food processing sectors; strong education and research institutions; and creative industries that are attracting new economic investment and vitality to the city.

Fred is focused on achieving continued growth and prosperity as well as protecting our environment. He was instrumental in landing a $1-billion Light Rail Transit initiative for Hamilton, for ensuring Syrian refugees were welcomed and settled in the city, and for putting forward a $50-million proposal to improve affordable housing and reduce poverty.  Recently he was elected Chair of Intelligent Community Form Canada.

About Robert Bell
Robert Bell is co-founder of the Intelligent Community Forum, where he heads its research, analysis and content development activities.
See other pages related to Robert Bell Hamilton podcast Summit18 eisenberger
Share on