In the 2016 Intelligent Communities Awards, Hamilton, Ontario, Canada was named a Smart21 Community. To build further on this success, the city created a task force to examine Hamilton’s infrastructure, identify gaps in its digital strategy across the municipality, and develop an action plan to make Hamilton a destination for investment. 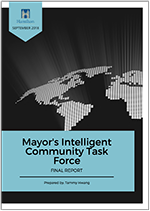 As we reach the two-year mark, the Task Force is taking stock of its achievements and identifying areas for future consideration. This report is intended to provide insight into the progress that has been made, and that has laid the foundation for the Task Force to continue to work towards its mandate.