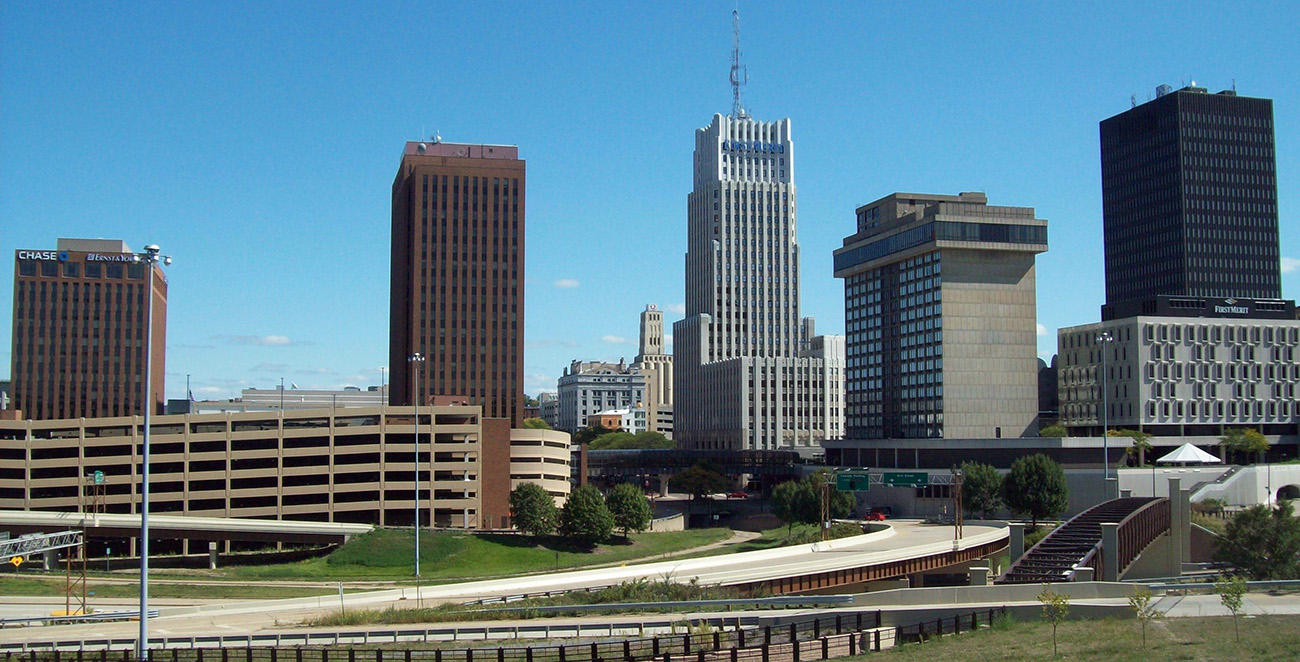 Northeast Ohio is an 18-county region bordering on one of America's Great Lakes to the north and including the major metropolitan center of Cleveland and the cities of Akron, Canton and Youngstown. To Americans of a certain age, the names of those cities tell the tale of the Industrial Age. This region was one of America's great trade and manufacturing centers, a key link in the national transportation system, home to steel companies and the place where Standard Oil founder John D. Rockefeller made his fortune. Following the Second World War, however, it fell into seemingly unstoppable decline, particularly in the core urban areas, as US manufacturing lost competitiveness in a global market. Amidst rising unemployment, eroding institutions, population loss and racial unrest, the tremendous wealth created in the industrial era was no longer invested in creating new businesses and industries, nor in education and the development of social capital. In 1978, Cleveland became the first US city to default on its creditors since the Great Depression and, in 2004 and 2006, was named America's poorest big city.

Yet the region retained hidden strengths: world-class health facilities, a vibrant arts culture, three major professional sports teams and respected institutions of higher learning, including Case Western Reserve University and Oberlin College. Another major asset was buried in a literal sense. During the 1990s, the telecom industry built out more than $4 trillion of fiber-optic communications systems worldwide. In most cases, these circuits followed the traditional transportation corridors such as rail lines and highways, which meant that Northeast Ohio found itself once again at the hub of a high-capacity transportation network.

In 2002, Case Western named as its new chief information officer a visionary named Lev Gonick. With global technology and community development experience on his resume, he soon began outlining a revolutionary idea. He believed that the region's nonprofit institutions could spearhead development of a common community network that would not only save them money and expand capacity but foster a wide range of innovation collaborations. The vision impressed many regional leaders, notable among them Cleveland Mayor Jane Campbell. Case Western and the city assembled a core group of institutions including NorTech (an economic development organization focused on technology), Cuyahoga Community College, Cleveland State University, the county library system, the local Public Broadcasting System (PBS) affiliate, and Cleveland's transit authority and school district. These were the founding members of a public-private partnership they called OneCleveland, which was eventually renamed OneCommunity. Under the leadership of its president Scot Rourke, OneCommunity forged partnerships with the region's telephone and cable carriers, under which the carriers donated unused fiber-optic circuits to OneCommunity and OneCommunity contracted for last-mile fiber and VPN services from the carriers.

To make the deal, OneCommunity had to overcome resistance to the creation of what carriers at first viewed as a new competitor. Fortunately, Rourke and his team came from the venture capital industry, which allowed them to talk the language of business plans and return on investment. It also ensured OneCommunity began life with a sustainable business model. Eventually, they persuaded all parties of OneCommunity's essential value: by helping the public and nonprofit sectors become better users of IT and telecom services, OneCommunity would save them money while simultaneously boosting demand across the region. And boost demand it did. Lev Gonick reports that, prior to OneCommunity, Case Western was using about 40 megabits per second of capacity for all of its operations. Within a few years of joining the OneCommunity network, average demand had risen to 400 Mbps. Since start-up, the OneCommunity network has expanded to connect more than 1,500 schools, libraries, governments, hospitals and universities. Its OneClassroom content and digital asset management system connects these users to world-class content from the Cleveland Museum of Art, Cleveland Orchestra, PBS and other sources. In 2006-07, the network hosted an 18-month program called Voices & Choices, which engaged tens of thousands of area leaders in Web-enabled "town meetings" in order to educate people about the challenges facing the regional economy and obtain their input. Voices & Choices has led to a regional economic development plan called Advance Northeast Ohio, which focuses on business growth and attraction, talent development, inclusion and government collaboration for greater efficiency.

OneCommunity would be impressive just as a story of network deployment - but it would not have achieved the potential that its creators envisioned. Because OneCommunity's Board is made up of the leading governmental and nonprofit institutions of the region, it became the hub of intensive collaboration. Today, the work of tech-based economic development agency NorTech, for example, is complemented by Team NEO, a joint venture of the largest metro chambers of commerce, which works to attract business investment in targeted sectors. Another nonprofit, JumpStart, provides venture capital to start-up companies with high growth potential. In 2006, it tied for ninth among the 100 most active investors making first-time investments in start-up or early-stage companies, according to Entrepreneur magazine, up from 61st place in 2005. Meanwhile, private investor Morgenthaler Ventures, founded in Cleveland with offices in Silicon Valley's Menlo Park, tied for 11th most active on the Entrepreneur list.

BioEnterprise is another nonprofit partnership, founded by The Cleveland Clinic, University Hospitals, Case Western and Summa Health Systems. It supports business formation, recruitment and acceleration for emerging medical device, biotechnology and health care service firms. Since its founding in 2002, it has created, recruited or accelerated more than 60 companies, helped them attract more than $565 million in funding, and concluded over 225 technology transfer deals with industry partners.

In November, OneCommunity announced that it would share with the Northeast Ohio Regional Health Information Organization (NEO RHIO) an $11.2 million grant from the US Federal Communications Commission to develop a regional broadband health care network. The network will connect 19 rural hospitals and numerous clinics in 22 counties to over 30 existing hospitals already on the OneCommunity network. The project will enable NEO RHIO and its collaborating medical providers to deliver telemedicine, records access, medical imaging and remote diagnostic services to improve community health care. At the same time, it creates the opportunity for the region to become a center of excellence in the emerging business of electronic patient records management.

The efforts of OneCommunity and its partners are all directed to the same goal: rebuilding the business, political and social culture of entrepreneurship that created the region's Industrial Age prosperity. In the Broadband Economy, that takes a different set of assets and skills, from broadband to partnerships to digital literacy. It also takes long-term investment in human and social capital. But the partners are betting that same spirit that drove the region's earlier success can create a sustainable and inclusive economy in the 21st Century.