Suneet Singh Tuli has over 25 years of experience as a serial entrepreneur, having launched two successful companies prior to DataWind. At DataWind and previous ventures, he patented technologies that were created to develop scanning, printing and imaging products that set world records in both price and performance. The products created through these ventures have received numerous awards and accolades, including recognition by the Guinness Book of Records.

Mr. Tuli was cited for the development of the Aakash II/UbiSlate tablets, which the Intelligent Community Forum believes will revolutionize access to knowledge for billions of people and stabilize communities in the process. The tablet is the world’s cheapest computer, according to Forbes Magazine. One of his best-known quotes is about his mission. Mr. Tuli said, “I don’t care about creating the iPad killer. I care about the four billion people who can afford this device.”

The 2014 Intelligent Community Visionary of the Year has previously been recognized by Forbes Magazine in its 2012 Impact 15 list as a “classroom revolutionary” using innovative technologies to reinvent education globally. He was also named the 2012 Entrepreneur of the Year at the World Sikh Awards. 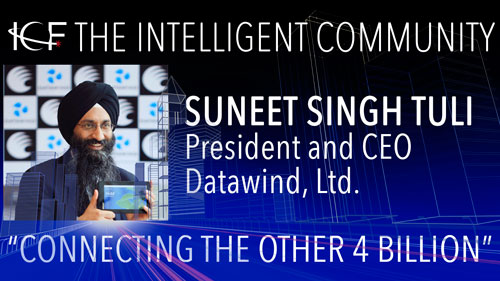