The Intelligent Community Forum names the Smart21 Communities of 2016 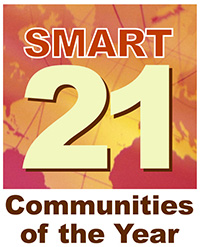 “We are very excited to name 11 new communities from North America, Europe and Asia to this year’s Smart21,” said ICF co-founder Robert Bell. “We streamlined our selection process this year, increasing the quantitative portion of the data-gathering and analysis, and that has created opportunities for more cities and counties to be included in consideration for this prestigious group of Smart21 Communities.”

NOTE – The Intelligent Community Forum produced a video about the Smart21 for 2016. It can be viewed here – www.youtube.com/watch?v=0ot9O7gSaVY

The announcement of the Smart21 list was made at the conclusion of a one-day conference in Dublin, Ohio, USA launching a new ICF Institute for the Study of the Intelligent Community. The new Dublin Institute will be built as a collaborative effort among global public and private sector leaders, universities and research institutions. The Institute will also provide interested parties with knowledge and information on the Intelligent Community process. More information about the new institute can be found at http://globalinstitute.dublinohiousa.gov

Evaluation of Intelligent Community Forum Awards Program nominations is based on the six Intelligent Community Indicators, which provide the conceptual framework for understanding all of the factors that determine a community's competitiveness and point to its success in the broadband economy. In addition, the Awards are guided by this year’s theme, From Revolution to Renaissance, which focuses on how Intelligent Communities plan their future at a time when the economy, the environment and the patterns of urban and rural life are undergoing dramatic change. Click here to find out more about this year's theme.

About Intelligent Community Forum
The Intelligent Community Forum (www.intelligentcommunity.org), headquartered in New York, is a global movement of more than 140 cities, towns and regions. As an international think tank and Foundation, ICF studies and promotes the best practices of the world's Intelligent Communities as they adapt to the new demands and seize the opportunities presented by information and communications technology (ICT). To help cities and towns build prosperous economies, solve social problems and enrich local cultures, the Intelligent Community Forum conducts research, hosts global events, publishes books, and produces its high-profile annual international awards program. The Forum has two Institutes in North America dedicated to the study of the movement, with more institutes planned. Global leaders, thinkers, and media observers follow and participate in the ongoing global dialogue initiated by the Intelligent Community Forum. In 2012 ICF was invited to participate at the Nobel Peace Prize conference in Oslo and in 2014, its model and work was recognized by the U.S. Department of Commerce under the Workforce Innovation and Opportunity Act, which, according to the American government, was "aimed at creating a more flexible and responsive system of workforce development to meet the needs of employers looking to fill 21st century jobs.” The Forum’s Foundation has an association made up of 134 designated Intelligent Communities worldwide, which is represented by mayors and key civic leaders. For more information, go to www.icf-foundation.org. For more details on the Intelligent Community Forum’s recent publications and programs, www.intelligentcommunity.org